French investigators believe high workload during an unexpected go-around and the subtle effect of a mode change led an Air Algerie Boeing 737-800 to descend while the crew was attempting to climb.

The aircraft, arriving from Tlemcen on 6 December 2019, had been conducting an ILS approach to Paris Orly’s runway 25 and nearing touchdown when air traffic control ordered a go-around after a runway incursion alert – an alert which ultimately proved to be false.

Go-around required climbing straight ahead, turning left at 700ft and climbing to 2,000ft. The crew had already previously set the 2,000ft go-around altitude in the mode control panel.

French investigation authority BEA says the crew manually advanced the thrust levers and the aircraft rapidly climbed with a vertical speed of up to 4,000ft/min.

But although the crew subsequently engaged the autothrottle, the autopilot remained disengaged. The crew’s control column inputs followed the flight director cues.

The required left turn was started late and resulted in a steep left bank which triggered a ‘bank angle’ warning.

During the turn the missed approach altitude of 2,000ft was exceeded and, under a combination of nose-down input from the pilot and a reduction of thrust from the autothrottle, the aircraft started to descend.

As the aircraft came out of the turn, it was descending through 1,900ft at more than 1,500ft/min.

BEA says the controller asked the crew to climb to 3,000ft. But if the autopilot flight-director system is in ‘altitude acquisition’ mode, dialling in a new target altitude results in a vertical speed mode reversion.

This reversion – which is signalled to the crew on the flight mode annunciator – has the effect of fixing a vertical speed target, the target being the instantaneous vertical speed at the point when the altitude selection was modified.

“The system does not check for consistency between the vertical speed and the selected altitude,” says BEA.

“After this mode reversion, the crew followed the [flight director] command bar cues which kept the aircraft in descent,” says BEA.

The crew received ‘don’t sink’ alerts from the aircraft for 45s and was contacted three times by air traffic control before arresting the descent at about 1,300ft and levelling before accelerating and resuming the climb to 3,000ft where the aircraft was stabilised.

It then carried out a second approach to runway 25 and the aircraft (7T-VJM) landed without further incident. None of the occupants was injured.

BEA believes the startle effect of the go-around, combined with the relatively low missed-approach altitude, generated a high workload for the crew and probably explains some of the flightpath deviations.

“The crew were surprised by the instruction to go around, it says. “This gave rise to some questioning during the phase which followed and may have absorbed numerous attention resources.”

BEA says the pilots are likely to have followed guidance cues from the flight director command bars without having checked whether the associated modes and target values were compatible with the intended flightpath. 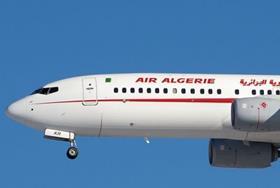